Microeconomics is a branch of economies that deals with for an individual economic agent, household or firm. Macroeconomics on the other hand deals with aggregate economics activity. Demand and supply in a single market, outcome of different market structure, production and cost structure of the single firm belong to the domain of microeconomics. National output, aggregate price level, unemployment and other aggregate measures belong to the domain of macroeconomics (Cowell 2018). The portfolio assessment is developed selecting some aspects of micro and macroeconomics. Concerning to microeconomics, market outcomes of perfect competition and monopoly market are compared.  To analyze the macroeconomic environment some selected indicators namely GDP growth, unemployment, inflation and migration trends evaluated.

A market is said to have perfect competition if there are various sellers in the market place that are competing with each other. Presence of large number of buyers and sellers in the market is one main feature of perfectly competitive market. In such market, because of presence of large number of buyers and sellers each has a very little share in the market. All the buyers and sellers in the market have perfect knowledge. Each firm produces homogenous or identical products. Sellers are price take in the market accept market price determined from demand and supply force. Firms face no barriers to entry or exit the market (Cowen and Tabarrok 2015). In the short run, the equilibrium is attained where price meets the marginal cost. Competitive firms in the short run are in a position to enjoy a supernormal profit or incur an economic loss. In the presence of economic profit, new firms enter the market. This lowers price and profit. During economic loss, firms exit the industry. This reduces loss. Entry or exit in the industry continues unless there is only zero economic profit. Firms in the long run operate at the minimum point of average total cost achieving both productive and allocative efficiency. 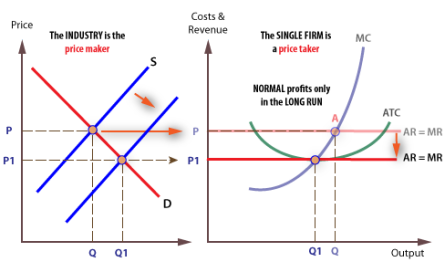 Monopoly is a market environment that is operated by a single seller. The most important characteristic of the monopoly market is the presence of a single seller. The single seller in the market controls the entire market and takes market decision independently. Unlike perfect competition, the monopolist is the price maker in the market (Cowen and Tabarrok 2015). There are strong barriers to enter the market. Factors such as patents, copyright, economies of scale and such other make it difficult for new competitors to enter the market. The monopolist sells a unique product that is for the product sold in the market, there is no available close substitute. Following the dominance of the monopolist over the market, consumers do not get complete information about the market and product purchased by them (Cowell 2018). Market power of the firm is the highest under monopoly. Monopolist firm by exploiting its market power can enjoy more than normal profit both in the short run and long run. 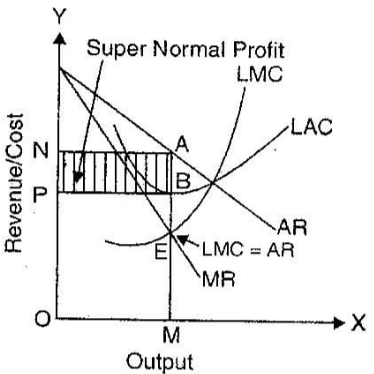 Monopoly and perfect competition are thus completely opposite to each other. Because of absence of any market competitive market ends with efficient allocation of resources with attaining maximum social welfare. Market power of the monopolistic firm on the other hand allows it to supply a smaller quantity at a relatively higher price. This results in efficiency loss or deadweight loss for the society as shown in figure 3. 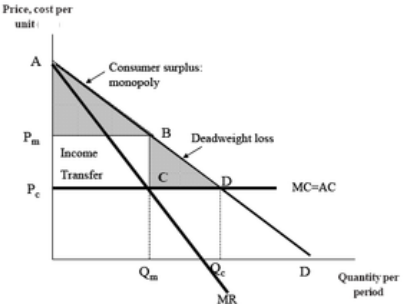 Business cycle or trade cycle explains the alternative phases of recession and expansion I the economy. The four distinctive phases of business cycle are expansion, peak, recession and trough. The unemployment rate in Australia hit to a relatively high level in contrast to its historic trend. The high unemployment rate is consistent with below expected growth rate. Growth in the financial year of 2014 remained below the trend growth rate. The growth rate however is projected to recover depending on growth of investment outside mining. The economic growth rate of Australia further gets support from a relatively low interest rate. The growth in activity outside mining prevents any severe recessionary pressure for the economy.

Gross Domestic Product is a macroeconomic measure of overall output of the nation. The year on year changes in GDP in percentage term presents the economic growth rate an economy. 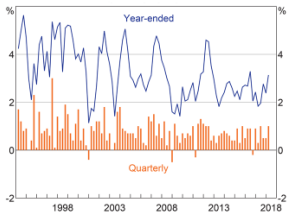 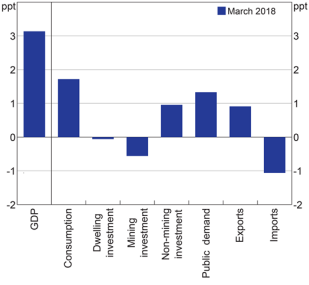 The projected growth rate for the first quarter of 2018 was 0.9 percent. However, the economy successfully achieved an increased growth rate by 1 percent. . With this the growth rate hit to the highest level since the second quarter of 2017. Export accounted the largest share in the GDP growth as followed by government expenditure, consumption by household, consumption in non-dwelling sector and inventories. As shown in figure 5, consumption is the largest contributor of GDP. Household consumption increased for financial and insurance service, gas, fuels and electricity. The import demand grew by only 0.5 percent. This is much lower than the import growth of previous period which happened to be 1.6 percent (rba.gov.au 2018). This helps to narrow down the trade deficit making a positive contribution to economic growth. 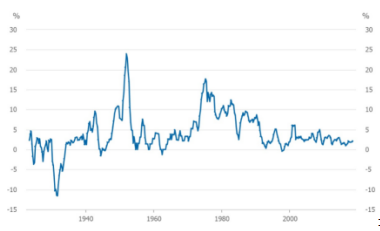 The seasonally adjusted unemployment rate in Australia slightly lower to 5.4 percent in July as compared that that is the previous month. The recorded unemployment rate is below the predicted rate. The total number of unemployed declined to 706000, recording a decline by 5700. People searching for part-time jobs declined by 8000 (rba.gov.au 2018). As against this, people looking for full time jobs increased by 2300 giving a positive outlook for labor market.

Impact of Immigration on the economy 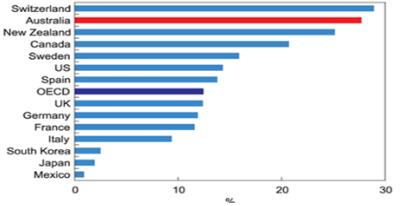 Immigration has an important influence on Australian economy and society. As shown from figure 8, the share of migrant population in total population for Australia is close to 30 percent. Recent migration program mainly focuses on enhancing skills of immigrants. Economic impact of migration is realized in terms of difference in the labor market and in demographic characteristics between migrants an Australian born population (pc.gov.au 2018). Lower per capita income and increased unemployment are some adverse consequences of increasing migrant flow.

A different market outcome is obtained for different type of market. A socially efficient outcome is produced in the perfectly competitive market. The market outcome in the monopoly market on the other hand is socially inefficient. Monopolist by using the market power produces a lower quantity and charges a higher price. After experiencing some years of declining growth, economic growth in Australia has recovered slightly. Household consumption makes the largest contribution in economic growth. There is relatively small increase in the inflation rate due to an increase in prices of fuels, tobacco and electricity. Labor market condition has improved following a decline in unemployment rate. Steady performance of different economic indicators contributes to a strong performance of the economy.

Earn back money you have spent on downloaded sample

Want to order fresh copy of the Eco10001 Economic Principles International Higher Assessment Answers? online or do you need the old solutions for Sample Eco10001 Economic Principles International Higher Assessment Answer, contact our customer support or talk to us to get the answers of it.