The economic performance of different countries as well as that of the global scenario considerably depends on the activities and dynamics of different macroeconomic indicators like that of the Gross Domestic Product, the rate of inflation, unemployment rate and others, which shows the overall growth conditions of the economy and the wellbeing of the population of the concerned countries or regions (Agénor & Montiel, 2015).

Of these indicators, the rate of unemployment present in a country and its dynamics appear as matters of huge consideration as the same have significant implications not only on the present generation of the population and their economic wellbeing but the effects are also transmitted to the future generations and on the overall purchasing power, consumption pattern, aggregate demand-supply situations and the overall productivity and prosperity of the economy, in the long run as well as in the short run (Pigou, 2013).

In this context, Australia, in spite of being one of the most developed and stable economies in the global scenario, can be seen to be facing considerable dynamics in the aspects of different unemployment statistics in the country, especially over the last few years and the same can also be seen to experience different types of unemployment, owing to both internal and external dynamics faced by the economy. Keeping this into consideration, the concerned report tries to discuss the aspects of measurements of unemployment, thereby discussing the trends and causes of unemployment in Australia, in the contemporary period, thereby analysing the policies which can be implemented by the same to solve the problem.

In the conceptual and theoretical framework of economics, the term “Unemployment”, refers to the situation in an economy, where there is presence of a number of people in the adult population, who have the eligibility to work and are also willing to work, but who do not get the opportunity of finding any employment in the economy. To understand the notion of unemployment and the measurement of the same, it is important to understand the concept of labour force in an economy.

Labour Force- The labour force of an economy consists of the usually the people from the population (of age 15 years to 60 years) who are eligible and are also willing to find employment. They may be employed or not employed at a particular point of time (Wu & Xia, 2016). On the other hand, the labour force excludes those in the adult population who voluntarily choose not to get employed and the discouraged workers.

Thus, the employment scenario of a country can be measured with the help of the dynamics in the labour force participation rate:

On the other hand, the unemployment rate of the country shows the magnitude of the problem of joblessness in the economy at a point of time in the concerned country and the same can be measured as follows:

This is the usual method of measuring unemployment in the generalized global economic framework, with different variants used in different countries and for different types of unemployment (Michaillat, 2012).

The economy of Australia, being one of the most stable and impressive economies in the country, has however had its share of fluctuations in different aspects of the economy. In terms of unemployment the general trend of the same, in case of Australia, over the last few years can be seen to be as follows:

Figure 1: Rate of Unemployment in Australia over the last few years

As is evident from the above figure, the rate of unemployment, which used to be near 5.4% in 2012, rose considerably, to as high as 6.4% in 2015. However, the same fell to some extent (to 6%) in 2016 and further post 2016 and the rate can be seen to be around 5.5% in the recent period, which though lower than the previous years, can be still seen to be at a moderately high level for an economy like that of Australia.

Classifications of unemployment in Australia

In general, there are three broad types of unemployment in the conceptual framework of economics which are described as follows:

Frictional Unemployment- The usually short run unemployment which generally occurs while the workers move from one job to another, thereby remining unemployed for some time in between the transition process.

Cyclical Unemployment-  This unemployment occurs due to contractions in the business cycles of the economy, which leads to loss of jobs (Goodwin et al., 2015).

Structural Unemployment- This is a comparatively prolonged and more serious form of unemployment in general and the same occurs in the presence of any structural shift in the economy, which may lead to a change in the forms of employment generation and a mismatch between the demand for skills and the presence of the existing skills in the labour force.

In case of Australia, all the three types of unemployment can be seen to be present in the contemporary period:

Frictional Unemployment- This type of unemployment can always be seen to be present in the country as the people in the labour force keeps on changing their jobs, thereby remaining unemployed for short spans of time.

Structural Unemployment- The recent labour market of the country can also be seen to experience a demand-supply mismatch of labour skills that are present and that are required due to a sectoral shift in the economy from manufacturing to more of service sector industries. This indicates towards the creation of structural unemployment in the country.

Causes of unemployment in Australia

There have been several reasons behind the presence of unemployment in the country, the primary ones, in the contemporary period, being as follows:

Figure 2: Change in the population of Australia

This in turn has increased the labour supply in the country, much of which could not be absorbed in the formal employment sector.

Figure 3: Employment in Australia by industries

Major share of the labour force being those with basic skills (especially immigrants) and basic education level, they could not be employed in the capital-intensive service sectors, thereby increasing the unemployment problem in the country (Whiteford, 2014).

Unemployment by regions in Australia

The trends and nature of unemployment and the gravity of the situation can however be seen to be varying across different regions in the country, as can be seen from the following figure: 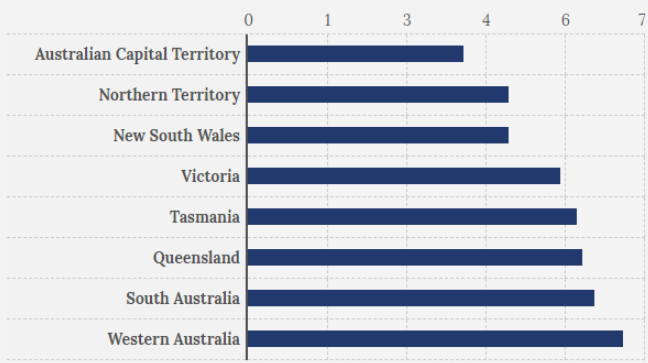 As is evident from the above figure, the problem of unemployment is most acute in Western Australia (6.8%) followed by South Australia (6.4%), much of which maybe due to the fact that these places experience huge immigrant inflow and are mostly manufacturing and agriculture relying regions. On the other hand, the problem can be seen to be least in the Australian Capital Territory and Northern Territory of the country, with the Northern Territory making up only 1.1% of the total labour force of the country but contributing nearly 243 million working hours on an average in a year, which can be attributed to the presence of employment generating industries and skill match in these regions (NewsComAu, 2018).

The primary policy which the government of the concerned country can incorporate to combat the solution is to invest in the skill development of the labour force in order to make them eligible for the new service sector employments. This may include education and development programs, some of which can already be seen to be implanted by the government in the recent years, in their National Employment Strategy (Ballantyne, De Voss & Jacobs, 2014). Apart from that, the government can also incorporate free market policy in the aspects of job searching in order to ensure efficient and fast allocation of jobs to those who are looking for it. Unemployment support and financial aids also needs to be provided to avoid the increase in the number of discouraged workers in the economy.

From the above discussion, it can thus be seen that the economy of Australia, in the contemporary period, has been experiencing different forms of unemployment, the causes of the same being intrinsic as well as extrinsic. The level of unemployment can also be seen to be varying across different regions of the country, mainly due to structural issues. The government has started taking several measures. However, there remains different methods which the same can implement in order to reduce the unemployment related problem in the concerned country in the coming periods.